Read more reviews from real parents like you on our product pages! 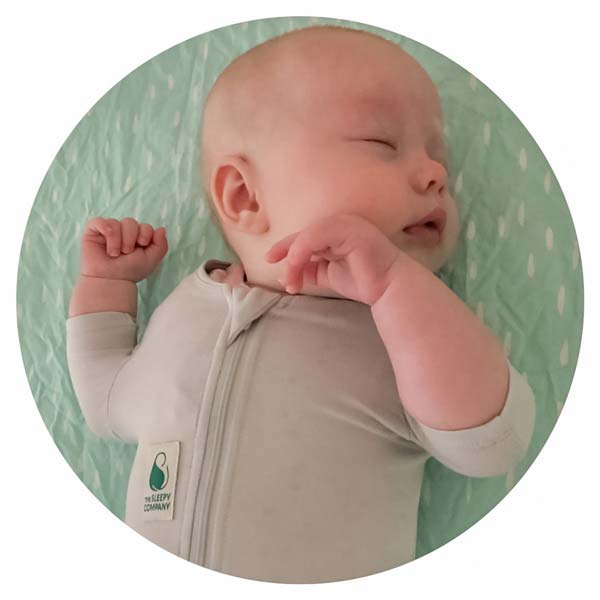 The first night in the FX swaddle she actually slept all night!

I LOVE THIS PRODUCT. Ava loves it too! It seems to hug her in all the right ways. It has helped improve her self-soothing ability. She is more settled in this swaddle. And I think that leads her to sleep for longer stretches which I have experienced.

This is the best swaddle out of all the ones I’ve used for my three kids. It by far improves the contentment of a baby. I believe this swaddle is more effective than others due to the firmer, more fitted material, and also the product design with both arms in and arms free.

I feel like this swaddle simplifies the sleep process by giving the baby what they need. This swaddle gives the ability to be fitted in different ways whilst still using the same swaddle. The fabric is perfect. Baby is content and firmly fitted. 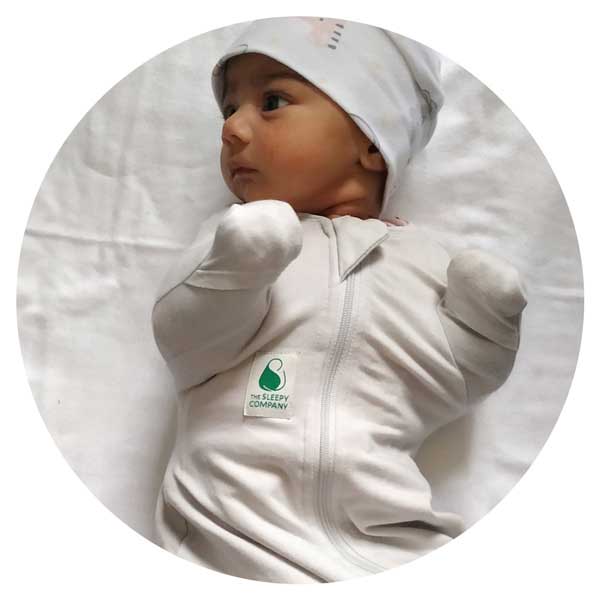 Fantastic product, very versatile, and very comfortable! Aahana didn’t cry when I put it on for the first time and seems to instantly relax as soon as it’s on. Other products she has tried to get her arms out of or thrashes around in. Since using the FX swaddle, Aahana has been sleeping so much better, sleeping hours on end.

Before the FX swaddle, I was having to co-sleep with Aahana at night as she just wouldn't sleep unless being held. Since she has been in the FX swaddle, I vary rarely have to co-sleep unless she is in excruciating pain with colic. This is a huge relief for me as I hate co-sleeping due to the risks and in the last two weeks I think I have only done it two or three times for about an hour until she settled down or the pain passed.

The FX swaddle’s startle reflex suppression is very effective because of its material and tight fitting design. Aahana doesn’t like the arms in but I think the beauty of this product is the multiple ways it can be used to suit your baby.

I absolutely love the versatility of the FX swaddle and its pocket design. The position of the arms is so natural and she looks so comfortable. Also I am currently using a cocoon bed during the day as she has bad colic and found I couldn't use other arms up swaddles with this as it didn't have room for her arms in that position and looked like she was going to suffocate. The FX swaddle doesn't pose that same problem as the arms are down chest height not nose height.

Also, it’s the first time a product is actually small enough for premmie/tiny babies! The FX swaddle has the correct tight fitting snugness and her arms are in a more natural position. She hated other swaddles and their positions, and got out of muslin cloth swaddles in a matter of minutes as she is a wiggle worm.

Every time I put Aahana in her FX swaddle she calm downs and is able to self-soothe on her own, not being held, just her FX swaddle and her dummy. Additionally, great quality, great material. Washes really well too and dries pretty quickly. I would definitely recommend the FX swaddle to other mums! 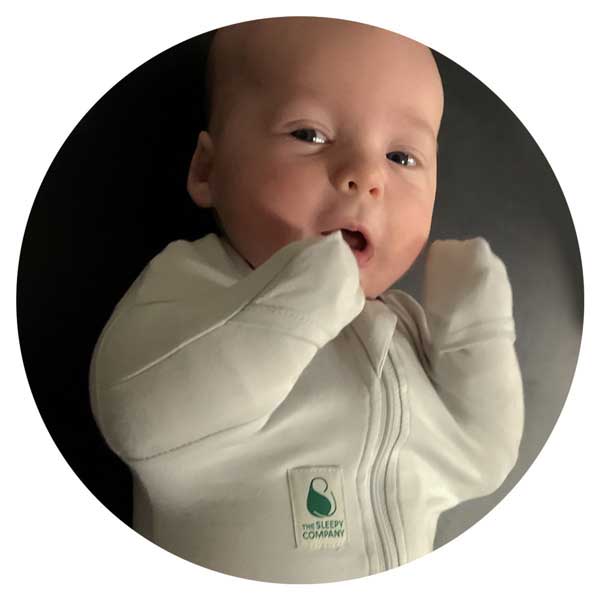 Baby likes his FX swaddle; he seems very comfortable and relaxed in it! He’s been sleeping better and for longer stretches. The FX swaddle gives different options for hand positions, having a range of motion, going arms fully in for a strong startle reflex restraint, then a little more freedom to adjust before going arms out and transitioning out of swaddle later on. Nice soft material, feels nice. I would definitely recommend to other mums! 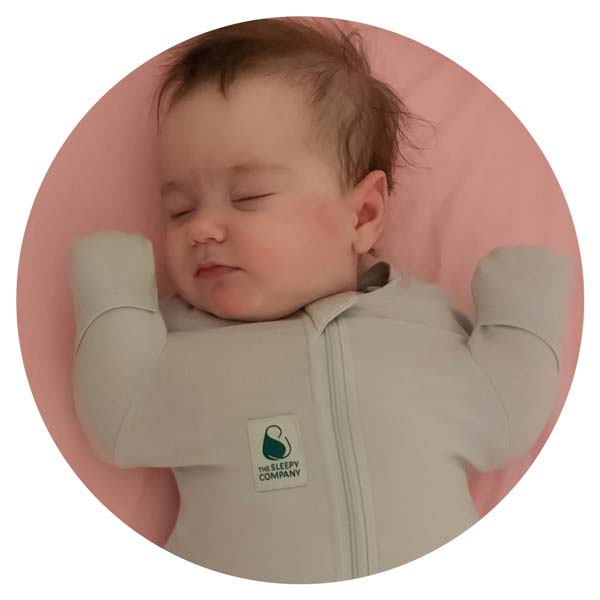 The moment Isabella was first put into the FX swaddle she was very calm and quiet. The first night she slept from 10pm-4.15am and 5-7am!!

After two weeks of wearing this swaddle her self-soothing ability has improved and she has been sleeping much better in it than her previous swaddle. She is more comfortable in this one, and she startles awake less in it!

I think that this is mainly due to the positioning of the arms in the fetal position in front of her chest.

There is the right amount of tightness around the shoulders, arms, and chest areas, which keeps her arms more secure, making it more effective in suppressing her startle reflex than with the other swaddle. At the same time she can have her arms near her chest to move and self-soothe in the fetal position.

There is additional leg room, which is good for when she is kicking. I also like the option to have her arms out, and for her to have access to her fingers and thumb to suck. 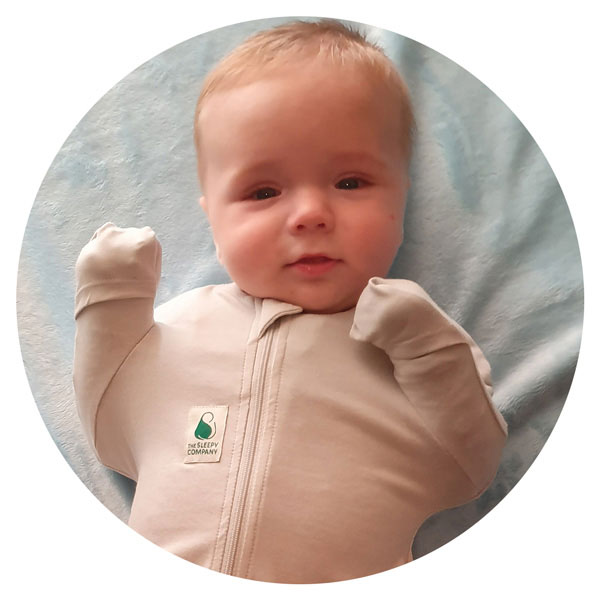 Since using the FX swaddle, Henry has started sucking his fingers to soothe himself, and he seems quite happy in it. It’s a unique swaddle, and at first, I thought it looked awkward, but when I tucked his arms in, he was quite happy and really comfortable wearing it. He seems nice and snug in it, and compared to other swaddles we’ve used, this is more effective in suppressing baby’s startle reflex. I would definitely recommend this swaddle to other mums! 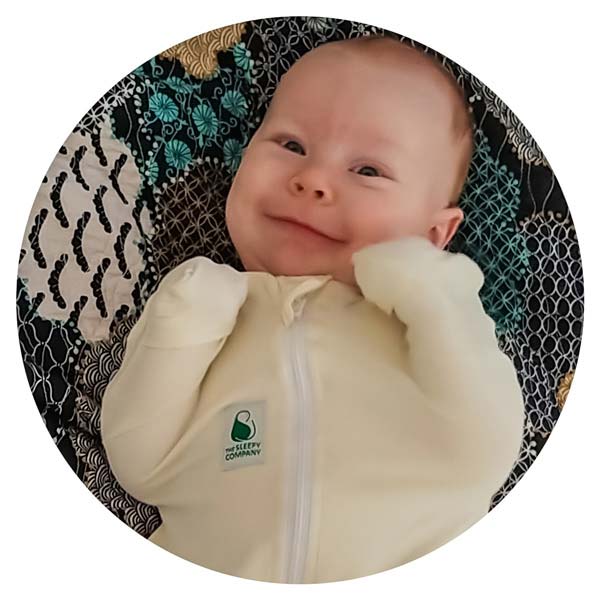 I really like the multiple positions for the arms and being able to give Clara a couple of intermediate options between arms in and arms out has been great. Previously, we had started playing around with taking one arm out in another brand swaddle, and she was still struggling with the startle reflex of the free arm.

With the FX swaddle, she gets to enjoy access to her hands (with hands covered at the moment) but limited movement, restricting her startle reflex very well. She has improved hand-motor and self-soothing ability, and she’s bringing her hands up to the mouth to settle herself more.

Having her hands in FX swaddle’s little mitts has been a really easy step towards the free arms. She seems more comfortable and more settled. In her other swaddle she always seemed to be pulling her hands forward and I think it pulled on her neck.

She definitely sleeps better, and is more settled for longer periods between feeds at times in the FX swaddle. Yesterday she even managed to move between sleep cycles on her own during a nap for the first time! The fit is great too. I would definitely recommend this swaddle to all other mums! 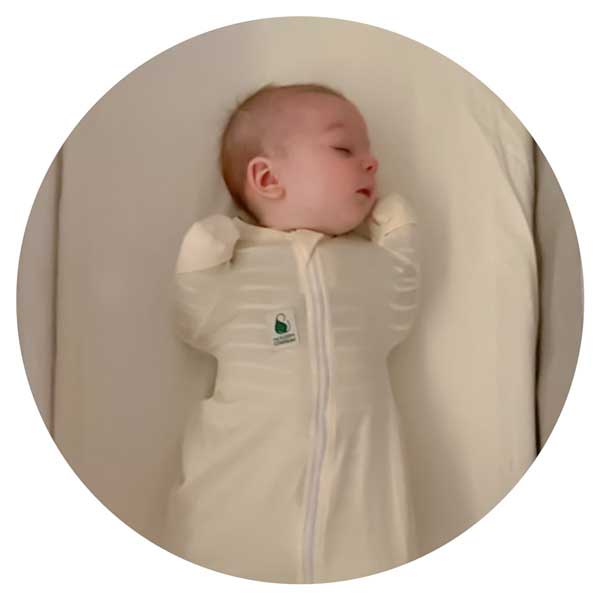 What I love about the FX swaddle is how comfortable it is! Very easy to use, Zach was very snug and slept well in it! He seems very comfortable in the arms in front fetal position and he tries and succeeds in sucking his hands! His hand motor ability has also improved. Also, I think this swaddle does a more effective job of suppressing baby’s startle reflex than other brands of swaddles we’ve used. 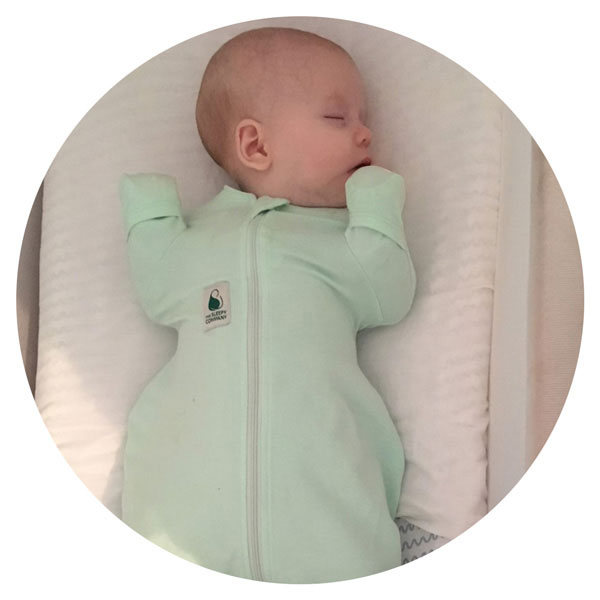 The FX swaddle seemed to help Layla settle really well. She’s quite comfy and happy in it. She’s been resettling and is definitely sucking on her hand to soothe herself, so possibly being able to suck on her hand may have improved her sleep. She’s been sleeping for good stretches as she doesn’t seem to wake from her startle reflex when wearing this swaddle. Also, there’s lots of room at the hips and seems a bit longer than the other ones we have which means it can be worn for a bit longer.